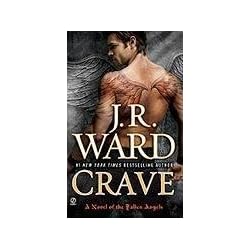 Seven deadly sins. Seven souls that must be saved. One more no-holds- barred battle between a fallen angel with a hardened heart and a demon with everything to lose.

Isaac Rothe is a black ops soldier with a dark past and a grim future. The target of an assassin, he finds himself behind bars, his fate in the hands of his gorgeous public defender Grier Childe. His hot attraction to her can only lead to trouble-and that's before Jim Heron tells him his soul is in danger. Caught up in a wicked game with the demon who shadows Jim, Isaac must decide whether the soldier in him can believe that true love is the ultimate weapon against evil.

Comment: I've finished this book on saturday night. I liked it, mostly because it's written by this author, but although I always like the feeling of reading something by her, I must confess I much prefer the world of BDB. This one in the Fallen Angels is to gritty, there's not such an intense feeling of belonging, of unity between characters. The evil is undetected, we can't always know exactly where it might come from. I don't particularly like that. And it annoys me a bit (in all books, not just here in particular) that we have so much voice from the bad guys. It makes me feel there's a doom coming and I hate it.
The romance was ok, cute ending.
I preferred this one to the first, though.