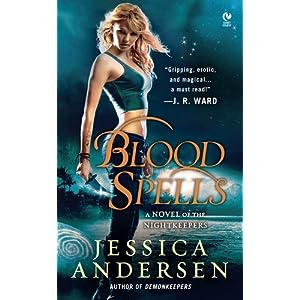 Mayan lore and modern science warn that 12/21/2012 will bring a global cataclysm. Dark forces stand poised to crush mankind. The only hope rests with a secret group of modern magic-wielders called the Nightkeepers. But as Patience White-Eagle and her husband, Brandt, team up as a mated warrior pair, they will face a deadly threat that will test their powers-and their love...
Comment: Patience and Brandt were the only formed couple when the adventure of the Nightkeepers began.
But their relationship wasn't well, they didn't talk and things always looked with too much tension between them. In this book they had to learn to trust each other, to solve old curses and problems and defeat their worst enemy and sava their sons.
I preferred the last book to this one but overall I was happy how things are developping tin the world, especially considering Mendez is with them now and it seems Anna really has to come back, sooner or later. There's this sense of union that in the end that's how things must work out.
In this book hapened things that are marking the time until the last book - Rabbit's - and it seems the Nighkeepers have to realize together is the only option.
I think Patience and Brandt's issues were due to lack of conversation, lots of RL couples face the same thing, but this is fiction, I think they could've worked out those things before..but it had to suit the timeline, so...I'm not totally disappointed but was expecting more fierce passion and not so much the simple acceptation in the end, just to ease things.
Another thing I'd like to see is more scenes between all the characters! They live together, come on, they should interact more than we see...although truth be told, there's this scene between Rabbit and Strike that made "awwwww" lol
Let's see if Mendez' book next year tops this one.
Publicada por S. em Thursday, November 18, 2010
Email ThisBlogThis!Share to TwitterShare to FacebookShare to Pinterest
Etiquetas: Jessica Andersen