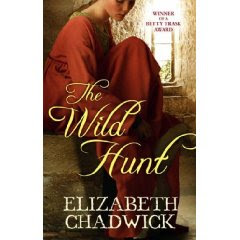 In the wild, windswept Welsh marches a noble young lord rides homewards, embittered, angry and in danger. He is Guyon, lord of Ledworth, heir to threatened lands, husband-to-be of Judith of Ravenstow. Their union will save his lands - but they have yet to meet...For this is Wales at the turn of the twelfth century. Dynasties forge and fight, and behind the precarious throne of William Rufus political intrigue is raging. Caught amidst the violence are Judith and Guyon, bound together yet poles apart. But when a dark secret from the past is revealed and the full horror of war crashes over Guyon and Judith, they are forced to face insurmountable odds. Together...

Comment: This is the first book I've read by this author. And I must say it won't be the last!I liked everything, from the characters to the writing. It's quite amazing, I'm still grining when thinking about the book.
Guyon is given Judith's hand in marriage because it's convenient to the king and at first she's too young and afraid to make the marriage work properly, although she has a mind and skills too high for her 16 years. However, after 2 years things change between them, they learn to cope with their live together amongst political and personal issues around them.
The author convinced with her writing, with her steady hand in details and in making sure the story doesn't loose its appeal.
I'm quite happy to have read this book, I have another one in my TBR list by her, but I'll surely investigate and buy more in the future. Oh and it seems this is the 1st in a trilogy, being the following ones The Running Vixen and The Leopard Unleashed. Can't wait!
Publicada por S. em Monday, November 22, 2010
Email ThisBlogThis!Share to TwitterShare to FacebookShare to Pinterest
Etiquetas: Elizabeth Chadwick