Tempt me with Darkness - Shayla Black 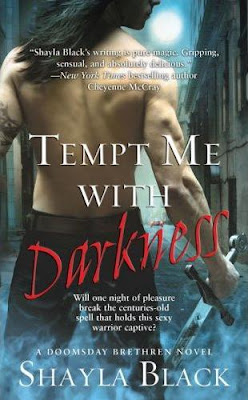 He's an immortal knight hungering for satisfaction....
As soon as Marrok sees Olivia Gray's dark windswept hair and burning violet eyes, he's sure they've met in eons past. He's felt her soft gentle curves writhing in pleasure beneath his own hard powerful body...Morganna! For centuries, towering Marrok, once the mightiest of King Arthur's warriors, has endured a terrible curse cast upon him when he spurned the witch.
She's a modern woman about to discover ancient magic....
Olivia shares a mystical — and irresistible — connection with brooding Marrok. Soon after the sexy warrior appears in her erotic dreams, he abducts her, demanding she uncurse him. Their intense passion is more powerful — and intimate — than either of them has ever known. Olivia may be the key to unlocking the diary that will break Morganna's hold on his life. But in the wrong hands, the book also holds the power to destroy all magickind. As they search for answers, a ruthless wizard returned from exile is building an army of evil. When he discovers Marrok and Olivia have the diary, only their love — with the help of a powerful group of magical Brethren — can save them.

Comment: I must confess I wasn't expecting much from this book. Things from the Arturian legend don't really appeal to me, but I wanted to see for myself if I was wrong.
Well, I wasn's completely wrong. The book is good but I'm not in love with the story. And I think it is worth more due to the characters than the actual plot.
I wished more authors would create more familair/friendship liasions betweeen characters. I wish this author had. I mean, obviously we get things because they are there, but in order to focus things in that couple, all the others can't have a central position. Nalini Singh and Ilona Andrews, for instance, do it beautifully.
Anyway, the plot didn't surprise me much, the villains are bad but must be defeated someday and thr writing isn't very special.
The characters, like I said, are the strongest part and I was happy to meet several interesting characters. Now I'm more eager to know what's happening to them, with whom they're mating, than anything else.
So, I hope the following books are better in all the aspects.
Publicada por S. em Saturday, December 11, 2010
Email ThisBlogThis!Share to TwitterShare to FacebookShare to Pinterest
Etiquetas: Shayla Black