If your inner wolf and your body react rather enthusiastically to a psychotic Alpha male who’s own wolf has a tendency to turn feral, it can’t be a good thing, can it? Entering into a bargain with him wouldn’t be good either. Unfortunately, Taryn Warner, a latent wolf shifter, doesn’t have many options open to her right now. Okay, she has no options. Basically it comes down to whether she’ll do what it takes to escape the arranged mating with the sick SOB that her father set up. As the answer in this case is yes, it looks as though she’ll have to agree to Trey Coleman’s deal…she’ll have to mate with him instead. 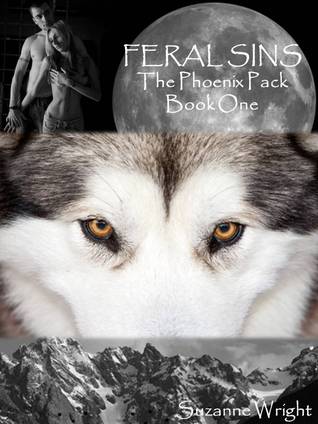 Having always disliked shifter politics, Trey Coleman hadn’t bothered trying to form alliances with other packs. Now that his uncle – a wolf with many alliances – means to take Trey’s territory and his pack, he has no option but to form some alliances of his own very quickly or he’ll be easily outnumbered in the upcoming battle. He figures that the easiest way to do that would be to mate with a female whose Alpha is powerful and influential. There’s only one problem with that – he would then be stuck with her, and the last thing Trey wants is a mate. When he hears of Taryn’s situation, he offers her a deal – if she falsely claims he’s her true mate and allows him to claim her, he’ll save her from her arranged mating and then let her leave after the battle with his uncle is over.
Sounds like a pretty straightforward deal...but soon Taryn and Trey realize they got more than they bargained for. Their mating instincts to protect and possess are weighing on them, they crave each other’s touch and company, and their inner wolves don’t like it whenever they’re apart. Add in that they’ll have to deal with this for an entire three months until the day of the battle finally arrives, and they’ve got themselves a recipe for disaster – or maybe for something quite the opposite.


Comment: This is another of the (many) books I had in my TBR list, collected from a time where I just had to get any PNR that caught my attention. As always, I keep being in the road to find the next best series in the world and in terms of PNR this was on that search. Sadly, it did not meet my expectations...

This is the story of Taryn Warner, a latent alpha wolf who doesn't want to mate with the wolf her father, the alpha of the peck, wants her to be with, only because of the connection the two packs will give him and the power that comes with it. So, Taryn decides to make a proposition to he alpha of another pack, so they can fake a mating and get her father out of her way.
Trey, the alpha she is looking for to make the deal actually has the same idea so he can have more reasons to fight a pack challenge from his uncle, and together they spread the news they're mated but plan to end it some time after their goals are accomplished. But the fake mating turns out to be much more than they think and while still battling opposing forces, can Taryn and Trey find happiness?

It tells you something when you read a book and the things you like the most is to criticize and want to see the characters act totally different from what you read about, right?
I don't think this is a romance, because there's nothing romantic about the story and the main character's relationship might follow most rules of a romance but didn't feel they were portraying a type of relationship I'd feel happy about knowing.

Both Taryn and Trey weren't people I enjoyed spending time with.Both were alphas so I can justify their in-your-face behavior and attitude. But they weren't nice people to the point I'd feel happy to know them.
Taryn is a fierce female and that is great but then all her attitudes, thoughts, actions ere based on that fact. Even her more vulnerable scenes weren't that. I can respect a strong character but she was like all the time and I didn't like how she spoke to others. Ok it can be her personality, but it still didn't make me eager to read about her and she was in almost every scene...
Trey wasn't interesting either, although his character made more sense, considering what is described about his past.
Then, their scenes together weren't of a balanced relationship...and knowing they were mostly speaking about or having sex, it was, allow me to say it, a turn off. Added to this, there was a lot of talk about possessiveness and mates being unique and whatever and what does Trey decide to do at some point? Yes, a menage of sorts. Come on....why? What did this help with the relationship except cheap thrills about how erotic toned the book/series can be?
I was annoyed, to say the least! There's no consistency in the book, after all the talk about mates being special, forever, then they can do whatever? From this point I just finished the book because I have this rule to do it, otherwise this would be a DFN...

The rest of the characters wasn't interesting either because no one seemed to have a job, interests or a life out of the main couple's sphere. And what about the world building? Nothing is explained, the author writes from the POV all is understood or maybe the point is to show of the characters and the sex they have. But then this isn't interesting and doesn't work for me.
Maybe I'm being unfair because I compare all PNR worlds to those I loved and many others are lacking but in reality I missed the balance, the explanations, the character development, the character's engaging personalities..
Then all characters act silly, talk stupid or without any seriousness, they don't seem to care about anything except the next pack fight/challenge, sex or who can win the jokes battle. I was bored with them all, to be honest.

All things considered, this was a let down. I can't fully explain how lacking I found this. The writing is actually good, simple, fluid, but the content disappointed me.
Nothing really captivated me so I won't read more. I feel bad but at the same time, with so many other books out there... it's just that shape shifter series are something I want to enjoy and when I don't it feels like a wasted effort...unfortunately, it was so with this book for me.
And I don't have much else to say...
Grade: 3/10
Publicada por S. em Tuesday, May 10, 2016
Email ThisBlogThis!Share to TwitterShare to FacebookShare to Pinterest
Etiquetas: Grade 3/10, Suzanne Wright