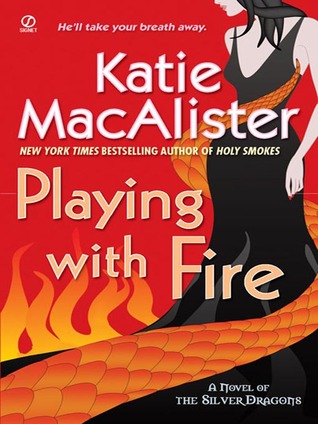 Starring the Dragons Of The Aisling Grey, Guardian NovelsGabriel Tauhou, wyvern of the silver dragons, has found the one woman who can withstand his fire. Too bad May Northcott is already bound to a demon lord. But when the demon orders May to steal one of Gabriel's treasures-an immensely important relic of all dragonkin- Gabriel has to decide which to protect: his love or his dragons.


Comment: This is a book I've added to my TBR probably more than 6 years ago at a time where anything that would include a PNR story featuring a romance would appeal enough to me to the point where I'd get it for the future. Because of this, I now have many titles I confess I no longer feel as thrilled by as I used to but, well... I try to add them to my reading lists. They had something to captivate me in the first place and, despite everyone's tastes changing, there has to be something about them still, right?

This book has dragons, one of the Paranormal type of beings I prefer, right after shape shifters. In this book, we follow the chaotic life of May Norcott and her twin Cyrene, a naied. During a spell with a demon lord, Cyrene has given up on her common sense once in order to have a twin sister, a doppelganger. Now May is the one who has to help and often take care of Cyrene, despite being several decades younger. May has a complicated life but things get more confusing when she is told to steal something and gets in the path of Dragons.
Among them is Gabriel, a Silver dragon who wants to restore peace among several of his kind. Finding his mate wasn't in the plans but Gabriel accepts and helps her too. If only they could rescue May from a contract with the demon lord that caused her existence..

This book is confusing. It starts based on the idea the reader has read other books before and there several characters and comments related to previous things that a new reader might struggle to follow.
In the beginning, it didn't seem so bad and I was actually very interested in May and her secrets, her life, her personality. Up to the first third of the story was was hooked. The writing is that sort of silly/light narrative meant to let one relax and not think much but up that point I wasn't bothered by it despite not being my usual preference in PNR.
Then things started to go downhill for me. The situations got sillier, more difficult to simply accept even among all the craziness. The characters started to look less and less quirky and more silly and boring.

I know that is seems pointless to insist when things clearly don't seduce you the way they used to. But then there are still surprises, good ones I mean, that prove that there are wonderful books out there to be found again by new readers. I just thought that this had so much promise and then it all seemed to get sidetracked. The dragons are shapeshifters but not once! in the whole book do we see any of them change shape completely.
May started being amazing and very decided to keep to herself as much as she could, her life wasn't her own after all, but the insta-love tat often works out so well, turned out to be ill used here in my opinion. It just didn't seem credible enough how it happened. It's like there's a change in personality in May. I don't understand how authors don't look at that and write things in a way that would still show the same idea but more in pace with the character's attitudes and personalities.

The romance felt flat, in my perspective. I guess I miss an emotional development between the characters and apart from the insta-connection and sex, it never go important why they could be mates.
The secondary characters had something to offer, I can accept that, but some we were supposed to know already and others it wasn't vital. I think the author didn't go as deep as she could in terms of characterization and emotional development as she could while maintaining the "lightness" of her style.

Finally, the end also disappointed me. So, it seems this is the first book of a trilogy featuring May and Gabriel, with known characters in the back, like a sequel to another trilogy, published before. Because this book didn't won me over as I wanted and expected, I don't think about reading more, meaning I won't know what happens to May and Gabriel; apparently it takes two more books to know that and I assume another minor cliffhanger - like in this book - will happen before the HEA.
Well, I'm not that worried. This is my first book by the author but I suppose it's safe to conclude her style can be great but it just doesn't fully suit my tastes.
Grade: 5/10
Publicada por S. em Monday, August 08, 2016
Email ThisBlogThis!Share to TwitterShare to FacebookShare to Pinterest
Etiquetas: Grade: 5/10, Katie MacAlister