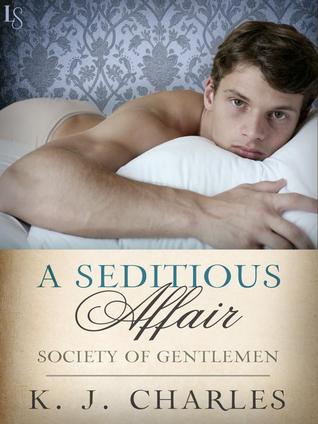 Silas Mason has no illusions about himself. He’s not lovable, or even likable. He’s an overbearing idealist, a Radical bookseller and pamphleteer who lives for revolution . . . and for Wednesday nights. Every week he meets anonymously with the same man, in whom Silas has discovered the ideal meld of intellectual companionship and absolute obedience to his sexual commands. But unbeknownst to Silas, his closest friend is also his greatest enemy, with the power to see him hanged—or spare his life.
A loyal, well-born gentleman official, Dominic Frey is torn apart by his affair with Silas. By the light of day, he cannot fathom the intoxicating lust that drives him to meet with the Radical week after week. In the bedroom, everything else falls away. Their needs match, and they are united by sympathy for each other’s deepest vulnerabilities. But when Silas’s politics earn him a death sentence, desire clashes with duty, and Dominic finds himself doing everything he can to save the man who stole his heart.


Comment: At the end of last year, I've read and enjoyed the first book in the Society of Gentleman series by author KJ Charles. So far, all books I've read by this author have been exactly my cup of tea. As with everything in life, I've enjoyed some more than others but all have been good. Therefore, it no surprise I'd try to keep up with the series, whose first book I've liked and I was expecting good things, not only because it was by this author but also because I knew many others had positive opinions about this second book.

When this book begins, it is a little parallel in happenings to a certain moment from the first book, which can lead us to have an interesting perspective on things.
Silas Mason is a sedition revolutionary and he wants democracy for all men and women. He profoundly dislikes the high society whose members can have all while the poor are hungry and cold. Dominic Frey is a rich and important man who works at the Home Office so his job is to ensure justice is there for all and law must be followed.
Although these two clash in every aspect of their social and public lives, on Wednesday's nights, for a while now, they have met and been together, not as political adversaries, but as lovers. And Silas is the one with the power over Dominic. With time, they have become sort of friends and when things seem to finally come out of their control, will they still feel like each one is the best thing that happened to them?

All things considered, this is quite the good book. As enjoyable as the others because the author has talent and can develop a plot with believable actions and interesting concepts. The cast of characters is also good, especially because we recognize characters we've come to like and even others that will play a part somehow so we end up being interested in them. As a whole, I think this story is a rich and well structured as all the others.

The author also likes to give each character a special peculiarity, which means every single character is unique, is special even in simplicity terms. Julius from the previous book was educated and harshly polite, Harry was young but dedicated, now we have Silas, who is a radical but idealistic and Dominic who is passionate but duty bound. Somehow, every aspect of each couple complements one another, even if we think they are all worthy on their own. Maybe this is why I always feel so sympathetic to every couple I've come to read about in this author's work.

My particular enjoyment of this book, however, wasn't as obvious as it happened in other books because Dominic and Silas' relationship wasn't as black and white as I imagined. I don't mind Dominic had specific tastes when it came to sexual relationships. I also don't mind Silas is there along with him and I honestly couldn't care if that was the kind of things they liked. But even recognizing people's right to their own choices, there was one thing that bothered me. There was talk of having someone else with them one day in the future and this really makes me enjoy the story less. I'm a firm believer in  monogamy so it bothers me a bit when even fiction characters talk about sexual plays withing the relationship, concerning third parties.

The plot is very centered on the revolutionary and political actions of a group of people, in which Silas is involved. There is a base of truth, explained by the author at the end of the story, which gives this an interesting vibe. I was interested in knowing all these things but that also mean that there was always a certain aura of danger and upcoming disaster that I confess I don't appreciate. Still, it offered a good development overall.

The HEA was sweet, easy when I thought it wouldn't happen like that, but it's quite the lesson, thinking the personal emotional sacrifices people did - and do - in order to live happy or freely or at least attempting to have that illusion. So, this is not my favorite book, unlike so many other readers out there, but enjoyable, yes.
Grade: 7/10
Publicada por S. em Friday, April 21, 2017
Email ThisBlogThis!Share to TwitterShare to FacebookShare to Pinterest
Etiquetas: Grade 7/10, KJ Charles