Chris Owen - An Agreement Among Gentlemen 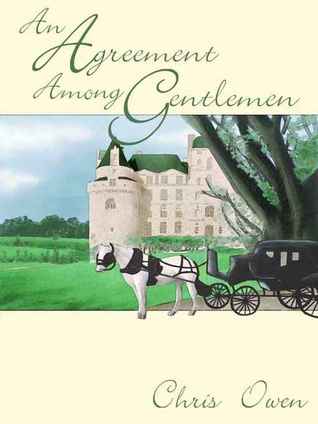 Edward Munrow has had a change in circumstances. Going from being a gentleman of few means to being a wealthy land owner in less than a day is difficult enough to imagine, but being blackmailed into a marriage he doesn't want by a Duke is just too much.
Ned agrees to the marriage to keep his name out of the scandal sheets, and soon enough he is meeting Lady Jane, a member of the Duke's family, and her son, Henri, the Viscount Langton. Langton is a delightful surprise for Ned, a young man just coming into his own, ripe for the sorts of debauchery Ned is best at.
The problem is that Langton brings out all of Ned's protective instincts, and that, along with a warning that the Duke will ruin him if he so much as lays a hand on the young man has him keeping his hands to himself. Until Henri won't let Ned protect him from himself, that is. Add one of Ned's old lovers to the mix and the combination is unbeatable.
This Victorian romp has it all, from family intrigue to marriages of convenience and naughty fun between the sheets. Take it to bed with you today.


Comment: I started reading m/m books in 2008 and 2009 was probably the year I invested the most in the genre, being it a novelty and such. I did go through many freebies and deals which allowed me to read several stories, some better than others. Chris Owen is an author I wouldn't consider a favorite but for a while one or two things by the author were special to me, so I tended to imagine this an author whose work I'd follow. Nowadays, things seem different to me.

This book tells us the story of Edward Munrow, a man whose titled friend left him his estate and also all the challenges that go with it in terms of maintaining and running the land. Ned, as he is know to close friends knows it's only a matter of time until someone approaches him with marriage proposals or deals and in fact, a sick duke does precisely that by blackmailing Edward, since he knows his sexual preferences and says he would spread that gossip until Ned is ruined.
One of the conditions to ensure Ned's acceptance of the plan is to have his nephew living in the estate for a while, Henri, the son of the first marriage of the woman Ned is supposed to marry. Ned accepts but he vows to seduce the duke's nephew and then say so to the duke. What he didn't count on was being himself seduced and falling in love...

As I've said, a book like this would have been amazing years ago, when the genre itself was new to me. Today, after many attempts I kind of know what my preferred style is and this is no longer it. This can be quite the situation because I still have some older titles in the pile and now I dread reading some of them...maybe the writing style is still something I appreciate but I fear not.
The style that I found impressive almost ten years ago no longer appeals much to me. The writing style isn't to my preferences nowadays and the content being too focused on sex scenes and inferred emotional content instead of seeing it happen in a logical but romantic way doesn't strike me as appealing as it used to be, especially because I prefer books heavy on the romance side, even in this m/m genre.

This book actually features a menage relationship which can be tricky as it never seems as there is balance. One element always seems to come after, to be an add on... in this book, because sex was the instigation point to the relationship, it just feels like the three of them were a handy mix. I never had the idea I was knowing the characters well and that I should be happy they were together. My expectations might be unfair considering what I knew of the author's work and the erotica label but...each book is unique and I hoped for different elements.

The main character, Ned, disappointed me. His attitude, the ease in which he participated in sexual situations didn't make me eager to see him reaching happiness and keeping it. In historical books, having solid m/m relationships within the strictness of society rules isn't easy but others have done so, and to me, this one failed in that. Is it a sexy book...? Yes, but the emotional side of things, imagining the emotional response these characters were having... it's just not the sort of attitude and behavior I like to read about. I just feel sad that after reading the book what is left is the notion of lots of little actions the characters carry on with, whether disguised as love or simply being called lust, only come out as being silly and sexual and that is the only reason they exist at all. It's just too repetitive and not interesting enough for me these days. I admit I skipped the sex scenes and some scenes where characters would be talking about or planning sex.
The other elements of the menage, Henri and Truitt, weren't memorable enough for me but it did annoy me Truitt seemed the third wheel and that Henri is a sex addict beneath his innocent act.

All in all, a disappointment. We can't always like everything, and I didn't find this as annoying years ago but now... I want the structure, I want the emotion, the romance and I want the characters to behave as good people. In this book I simply didn't have that notion.
Grade: 3/10
Publicada por S. em Tuesday, July 11, 2017
Email ThisBlogThis!Share to TwitterShare to FacebookShare to Pinterest
Etiquetas: Chris Owen, Grade 3/10, m/m