M.C. Beaton - Our Lady of Pain 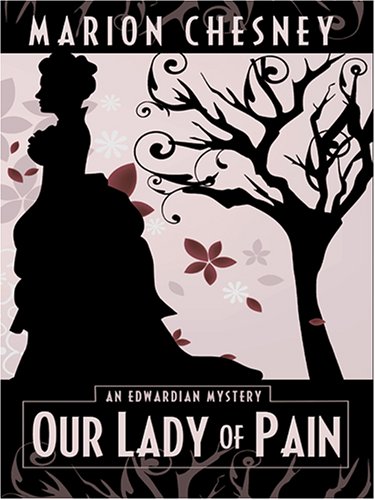 Lady Rose Summer, the wayward Edwardian debutante who keeps getting mixed up in disreputable adventures, would swear she is not a jealous woman. After all, she knows her engagement to private detective Captain Harry Cathcart is only a ploy to keep her parents from shipping her off to India.
But then Harrys latest client, Dolores Duvala vision of curves with a seductive French accentstarts appearing everywhere at his side ...
In a fit of rage, Rose threatens Dolores, only to be found the very next day, standing over her dead body. The newspapers rush to convict her, but can Harry and Detective Superintendent Kerridge clear her name?


Comment: This is the last installment in the Edwardian Murder Mysteries by author MC Beaton. I liked the first book a lot so I kept reading the series and I had hopes for this last one. As a whole, the quartet is funny, witty and entertaining but I confess I expected more of this last book.

The conclusion of the adventures of captain Cathcart and lady Rose Summer begins with a new investigation case for Harry Cathcart. Rose is not very happy with it, he keeps being a no show at events where they should be together and now the new case comes in the presence of a woman Rose is very jealous of. As usual, things happen quickly and Rose is soon the main suspect of that lady's murder, which propels her and Daisy's actions to another level of inappropriate behaviors. Can Harry save the day one last time?

Disappointed. This is the word that summarizes my opinion of this book.
After amazing adventures, both in terms of plot and also in character's evolution, this last book which I hoped would be the end of all the little personal threads to yet solve, proved to be very poor in those expected resolutions. I feel the author was too subtle in her last pages...

I have loved the tone and style of the writing since the beginning. I know many other readers dislike the short sentences, the almost condescending "voice" and the lack of depth in some details. But I just clicked with this and for some reason it all felt as if it made sense and I've come to love the stories, the details, the fun scenes here and there and the seemingly careless approach to the character's descriptions but which I found to have the right amount of layers for us to discover between the lines. Since this is the final book, I expected a great finale but it wasn't so.

My biggest issue with this book is the way it ends. First, some characters start acting rather silly, like Daisy and while I understand, her issues weren't explored well enough to let us assume the hidden reasons so she comes as vain and this bothers me. Rose too was not a character that stood out here. I guess I hoped for more flare from her, considering all the things she's done and all the risks she took in the previous books. Second, the HEA seems as if it's missing. Meaning, where's the rest of it besides the obvious? Perhaps an epilogue would have been too much to ask, but a few more pages describing possibilities, as we have for Daisy and Beckett and as we did in the other books for other characters and situations.
The reality is that when it comes to the final conclusion of Rose and Harry's relationship, all was subtle and not done well. After everything, a few words exchanged make up for a HEA? It feels like we were cheated on having it there on the page.

The plot doesn't have much to it, it's not too far from the plots in the previous books and things were solved rather easily. The domestic side of the book, meaning the lives of the characters outside the investigation, that is what makes these books so addictive and this was the part I felt wasn't done as well as it could.
Writing all this makes it seem I disliked the book when in fact it was good enough but the details, the lack of a proper (for me) HEA just brought the grade down. I guess I can always imagine what it could have been. But it's not the same.
Grade: 6/10
Publicada por S. em Friday, September 22, 2017
Email ThisBlogThis!Share to TwitterShare to FacebookShare to Pinterest
Etiquetas: Grade 6/10, M.C. Beaton