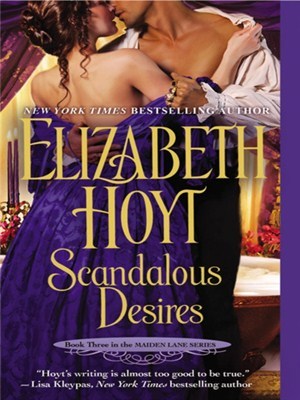 River pirate "Charming" Mickey O'Connor has lifted himself from the depths of the slums to be the king of St. Giles. Anything he wants he gets-with one exception. Silence Hollingbrook has been haunting his dreams ever since she spent a single night in his bed.
Once Silence was willing to sacrifice anything to save the man she loved. Now a widow, she's finally found peace when Charming Mickey comes storming back into her life with an offer she can't refuse. But this time she won't be the only one paying the price for his sins.
When his past comes back to torment him, Mickey must keep Silence safe from a merciless enemy, while wrestling with the delicious hold this widow has on his heart. And in the face of mounting danger, both will have to surrender to something even more terrifying . . . true love.


Comment: This is the third installment in the Maiden Lane series by author Elizabeth Hoyt. I'm trying to go through this series as the year goes by...

In this third story we follow Silence Hollingbrook, the youngest sister of Temperance, heroine to book #1.
Silence was first introduced in her sister's book and we got to know she was trying to protect her husband by going to Charling Mickey, a pirate to whom sailors pay a fee so their ships stay safe as the content inside them. After that, her husband no longer trusted Silence even when she asks him to believe nothing happened with Mickey.
Now, Silence is going back, this time to demand where is Mary Darling, the little girl she found on her doorstep one day and that she has been taking care of for almost an year. Believing her to be Mickey's daughter, Silence wants answers.
Mickey can't explain why Silence was a woman that has stayed in his mind all this time, probably her inner quietness and attitude but he knows he can't protect her from his biggest enemy if she and the baby are too far from him. Bringing Silence to his house by her own mind is a very clever move but what will happen if she gets into his heart?

As I expected, I did like this story. The writing style is there and I've come to really appreciate this tactic of dealing with a story line while almost quietly developing others at the same time and it seems Winter, Temperance and Silence's bother, will be the hero of the next book. This tactic is quite amazing for my personal tastes, I really like this notion people we are reading about have connection, they interact with others, they have a life that isn't only the person they form a romantic pair with. Although the focus never leaves Silence and Mickey as main characters, it's very nice to see things happening in their outside world as well.

However, I didn't like this installment as much as I did the previous one. The characters are amazing and while Mickey is a worthy hero, has and eventually does all the right moves, he is still a pirate. I can understand and respect his values mostly hidden within all the debauchery he did in the past (and that he claims he still does while we see he also has an inner depth all this author's heroes seem to have) but for me it's not as fun to read about these types of people, namely pirates and offenders of the law. It makes their redeeming feel a little too much a necessity of the story and not a given that would only be a detail. For instance, in the previous book the hero also gained money not being exactly lawful but he didn't steal or called it an euphemism. I know it doesn't sound such a great argument but I just can't warm up to pirates like Mickey. Of course things change at the end and he isn't only a pirate, he is a human being that I could respect more but...

The romance was slow, all things considered. I didn't think it was as passionately credible as others simply because the situation has too many issues that don't make them such a balanced couple: Silence is at a disadvantage because she needs to comply up to a point even if she ends up rebelling or falling for Mickey.
But the scenes of them together are sweet and when they get to the love stage of their relationship I wanted them to be happy.
A very nice detail is the scene the author has at her site as a sort of epilogue for this book.
Mickey and Silence do change somehow by being in love, by being with the other. Since they manage to understand happiness is having the other with them, the HEA feels right.

This book has many interesting details going on, for the most part is fit all the boxes for me to really love it but I just can't forget the pirating and that is a key element so...
I'm eagerly waiting the next one!
Grade: 7/10
Publicada por S. em Tuesday, January 30, 2018
Email ThisBlogThis!Share to TwitterShare to FacebookShare to Pinterest
Etiquetas: Elizabeth Hoyt, Grade 7/10