Part of Conversations with God series, this work covers global topics of geopolitical and metaphysical life on the planet, and the challenges facing the world.
"...this paradigm shift will take great wisdom, great courage, and massive determination. For fear will strike at the heart of these concepts, and call them false. Fear will eat at the core of these magnificent truths, and render them hollow.... Yet you will not have, cannot produce, the society of which you have always dreamed unless and until you see with wisdom and clarity the ultimate truth: that what you do to others, you do to yourself; what you fail to do for others, you fail to do for yourself; that the pain of others is your pain, and the joy of others your joy, that when you disclaim any part of it, you disclaim a part of yourself. Now is the time to reclaim yourself. Now is the time to see yourself again as Who You Really Are, and thus, render yourself visible again. For when you, and your true relationship with God become visible, then We are indivisible. And nothing will ever divide Us again."


Comment (with a long setting up): I got this book, according to my recordings of purchases, back in 2008. This is the second book in a trilogy titled Conversations With God by Neale Donald Walsch. I first knew about these books when a friend from school let me borrow the first installment back then, around 2001 or 2002 which means the books have been in my radar for decades now.
These books are mostly spiritual so I kind of let them be until now, when I finally decided to pick the second volume.

In this second volume, the author keeps up with the conversation he has initiated with God in the first volume.
The books exist, according to the author, after a moment in his life where everything seemed to go wrong and he felt so angry he started to write a letter where he talked to God about it. He claims he felt a need to write more after that, as if someone were saying the words of a reply in his head, in which he recognized it could the voice of God putting into words what could be the answer to the author's complaints and questions.
Even if one doesn't truly believe this part of the author's experience as real, the dialogue that came from that resulted on a very wide book on several topics, a sort of lesson to those who wished to understand why life isn't easy.

The conversation was divided into three books. Believing the author the process took months and the books weren't the result of just one "talk" but several in which God would answer different types of questions, which later on the author complied into different volumes.
The first volume more centered about personal issues, individual sort like questions related to a person's life and problems,
The second volume focused on broader issues like society and political problems;
The third volume about the universal questions, more metaphysic issues and the discussion of things like the origin of the world and why life is what it is.

As I've said, I've read the first book almost two decades ago (how time flies...) and I was at a moment in my life I did feel like talking to someone and receiving a message, even if from God. I'm catholic, I believe and go to church but I admit I'm not a follower of every little "rule" the Catholic Church tells their followers. I believe more in the love and charity one must dedicate to ourselves and others, rather than all those supposed rules from the Bible. By the way, the Bible to me is a sort of guide, a huge metaphor about customs and ideas from centuries past with notions and advice we should adapt to our daily lives but isn't the only way to behave.

Anyway, the fist book talked to me and I was curious about reading the rest. Back then I didn't have easy access to new books, I couldn't afford them all the time, then university came and people's focus is always hanging. Only later on, when I already had a different grasp of my routines, did I meet these books again. I bought in Portuguese volumes II and 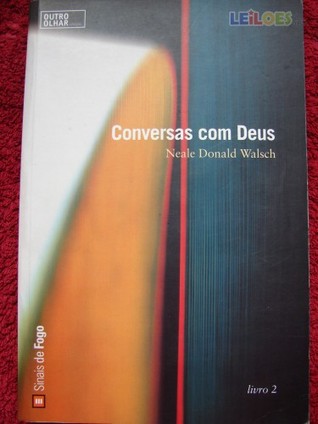 III but again, I let them stay in the shelf.

This year, while distributing titles through 2018 (I have a spreadsheet where I write down all this), I looked at my shelves to add some books that have been waiting for longer and this second volume I added to February.
I'm sharing all these unimportant details only to create a scenario on why I, personally, read some things when I do and don't just pick the first thing in front of me. I was also left wondering how this book would feel like to me, now that so long had passed since the first one.

This book felt very different. I have the notion the first was like a message to me whereas this one I couldn't help but look at with critical eyes, namely the way the information is presented. The dialogue format is great and often the author's questions pertinent and realistic. But the way God replies...it's very difficult to believe this could actually be a natural conversation between God and a man and in the first book everything felt more probable.
This book also focuses a lot on international themes like politics and economy and why we often think some people in power act they way they do, what could happen if God could come to us and say what we should do.
Of course, the author "escaped" that trap by always stressing out everything «God» says isn't His opinion, it's only suggestions.

Still, little details aside, the message is still as powerful but I can't help feeling disappointed because, as to be expected, all the examples used to illustrate a situation - even from God's POV - are centered on the US reality, the author's nationality I suppose. This makes the message seem very limitative and reduced to one reality. In the first book, because the situations were about the individual self, all readers could get the message as if to themselves.
I also noticed some incongruence, some repetitions... again, what made the first book so intriguing and special seemed gone in this one and the idea this is a dialogue with God and not just the author's theories (even if good ones) presented seems to be less and less what we are supposed to start from.

All in all, this has very good observations, things not every people would immediately think about and the food for thought notion is quite well done. The execution, however, was a let down because it turned what made the books special into just an excuse.
I do hope the third book can present a much better message again.
Grade: 5/10
Publicada por S. em Thursday, March 01, 2018
Email ThisBlogThis!Share to TwitterShare to FacebookShare to Pinterest
Etiquetas: Grade: 5/10, Neale Donald Walsch