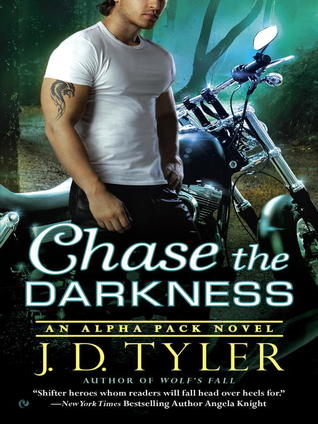 Believed dead by his Pack mates, Micah Chase, a wolf shifter and Dreamwalker, was held captive for months, subject to tortures that left him physically scarred and emotionally unsettled.
Now under the care of the Alpha Pack’s doctors, he’s been prescribed an experimental healing drug, but he still can’t shake the nightmares. Even more damning is that Micah’s problems pose a danger to his team, and if he doesn’t get himself under control, they’ll all suffer a terrible fate.
There is a key to his salvation. Jacee is a beautiful coyote shifter, and though her kind is hated, she’s falling in love with a man whose very future is in her hands. Together they’ll face his personal demons as well as a deadly enemy—and for both of them desire has never come with such risk.


Comment: This is the 7th installment in the Alpha Pack series by author JD Tyler. So far, this has been a paranormal series I've been quite a fan of, because I like the protagonists for the most part and also because the stories include many scenes with recurrent characters, which is always a positive for me.
This story, however, felt a little weaker when comparing to some of the others.

In this story we finally have Micah as a protagonist. We know he has suffered a lot in the past, he was captured, later on tortured but finally rescued a few books ago. He has been recovering but of course he still feels a lot of emotional pain and he has relied on some pills to bear his anxiety and trauma.
Jacee is a coyote shifter who works in a bar close to the complex where the Alpha Pack lives in and she likes that almost no one has realized she is a coyote. She has had a relationship with Jax (from book #1) before he met his mate but things never felt as right as they do when she meets Micah and realizes they are mates.
Despite the connection between them and the fact both try to make things work, can Micah let go of what he hates and suffers in order to embrace happiness before his choices kill him?

From what I wrote just now, it seems this story had all going on to be a very good one. Besides the known factors before these two get together from other stories, along with the focus on romance, this would be expected. However, I must say I was hoping for a more engaging plot/romance.

The romance is very often the element that most people want to see well in a book labeled so. I wasn't that  eager to have a book about about Micah and Jacee (their names are also a little annoying, they sound so childish to my foreign ears lol) because either had been that memorable for me from the glimpses I've seen of them before. But of course I'd be happy to see them achieve an HEA. As one can guess, the majority of their relationship is based on insta-lust (they are mates after all) and fighting each others demons, mostly Micah's.

I must say the combination of these two elements wasn't that well done in my opinion.
First, the attraction, despite convenient, doesn't explain everything and I liked how they took some baby steps to get to know each other better, they tried to respect one another but as usually happens, all progress was too quick.
Then, Micah has obvious issues to overcome, to get over...this also takes time and although I think the author was clever in letting him slowly improve from a few books ago (we would have someone comment on this and that) so that now things wouldn't seem as a miracle, Micah has things he still can't get past. I can understand this, he has been tortured. It's logical to assume he wouldn't be fine quickly. My issue is that there is a lot of talking about this but his issues aren't always treated as something that takes time to deal with. As if eh should heal faster now that most his worries are gone and he has found a mate. All this mixed up made the story a little repetitive and boring at times.

The villain chosen to balance against Micah's improvement was too "handy" and rather pointless. I'd have preferred no enemy to exist and this story being about a more realistic (and lengthier in tale) recovery for Micah.
Jacee, as his mate, obviously plays a certain part.. I liked how she was made to interact with the other characters, to give us the sense everyone was friendly if not best buddies, which is fine as well. I guess I'd have wanted to see more about them together besides the basic and the "mate bonding" theme.

There are more details to think about and I do love all the glimpses of the characters, even possible ones in future books but my favorite part, as usual in most serial books/installments, is how we get to see the interactions between everyone. It's really special to have the feeling we can also be part of such a community.
What a pity that for me, in this case, some aspects weren't as engaging or interesting overall.
Grade: 6/10
Publicada por S. em Wednesday, May 02, 2018
Email ThisBlogThis!Share to TwitterShare to FacebookShare to Pinterest
Etiquetas: Grade 6/10, JD Tyler