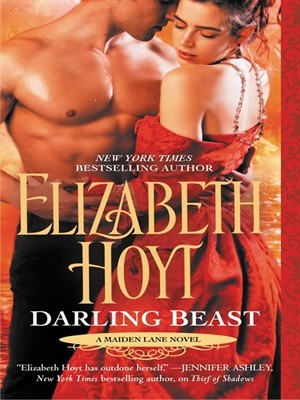 Falsely accused of murder and mute from a near-fatal beating, Apollo Greaves, Viscount Kilbourne has escaped from Bedlam. With the Crown's soldiers at his heels, he finds refuge in the ruins of a pleasure garden, toiling as a simple gardener. But when a vivacious young woman moves in, he's quickly driven to distraction . . .
London's premier actress, Lily Stump, is down on her luck when she's forced to move into a scorched theatre with her maid and small son. But she and her tiny family aren't the only inhabitants—a silent, hulking beast of a man also calls the charred ruins home. Yet when she catches him reading her plays, Lily realizes there's more to this man than meets the eye.
Though scorching passion draws them together, Apollo knows that Lily is keeping secrets. When his past catches up with him, he's forced to make a choice: his love for Lily . . . or the explosive truth that will set him free.


Comment: This is the 7th installment in the Maiden Lane series by author Elizabeth Hoyt. So far, I've been a fan of the series and this one was another one which hasn't disappointed, I got a story I was curious about and the author delivered.

In this book we have the story of Apollo Greaves, the twin brother of the protagonist of the previous installment.
Apollo was considered a mad man before and spent four years at Bedlam and only his sister Artemis would care about what happened to him. After the events of the previous book, Apollo is now hiding at Harte's Folly, a pleasure garden that was burned down and which some investors want to see redone, Apollo included.
Apollo has always had an interest in gardening, therefore he works there but he is surprised one day by the presence of a little boy and a dog. Apparently, the boy and his mother and servant are living in what used to be the garden's theater and his first look at Lily, an actress in some dire circumstances is all it takes for Apollo to want to get his life back even more. Will they find happiness with some challenges to overcome first?

The author has created such an amazing world around this series. It's fascinating to know a little bit more about several characters from book to book without looking as if the secondary characters steal the focus from what matters most in a specific book. As always, I felt the same has happened here and, despite this being a perfectly finished story, it's still better read after having read the others, everything makes more sense and the sense of understanding more rewarding.

Apollo is a great protagonist. He has suffered so much, he has been wrongly accused of a crime he didn't commit but sadly can't remember details. He is now free after some situations from the previous book but he wants to get his good name back and the acknowledgment his past reputation was due to a betrayal and not from his own actions.
As one can imagine, most of the story is about Apollo's change of views, his seeking revenge but not in the sense of punishing someone, more as an attempt to make something right again.
For this he hides but it's so cute too see him having a different mind set from most aristocrats at the time. He likes to work with his hands and he is good at it.

The love interest is Lily Stump, an actress with a small son. She is generous, congenial and protective of those in her care. She feels attracted to Apollo before she knows who he is and what title he will get but her feelings are quite romantic. Of course, also she has some things in her past to hide and I did like how the author has created a situation about her. This means that, for me, the couple complements one another and they seem to be quite balanced together.
I think their love story wasn't as intense as others, nor as "desperate", meaning, I think it wasn't done in a way we would immediately feel the angst was too much for them to reach common ground. Yes, they are from different status but their personalities and experiences bring them together quite nicely.

There are always some hints about secondary characters, machinations and secret agendas going on. Nothing too serious, but enough to make us curious.
The pace was again well done I'd say, and the way things progressed allowed for a good HEA. I just think some scenes weren't well inserted into the story and the romance could have been a little sweeter at times and not just practical.

All in all, another good story, I'm still more than eager to keep reading about this amazing group of characters.
Grade: 8/10
Publicada por S. em Wednesday, July 25, 2018
Email ThisBlogThis!Share to TwitterShare to FacebookShare to Pinterest
Etiquetas: Elizabeth Hoyt, Grade 8/10