Lisa Day - Love and Betrayal on the Santa Fe 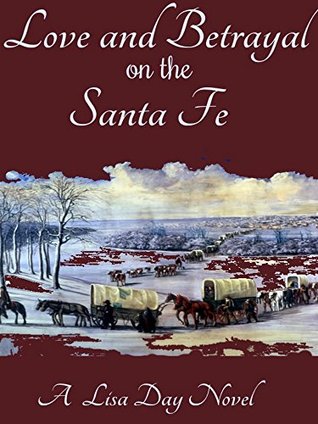 In 1859 the opportunities for women were scant unless one wished to take a chance. Calico Benson, a gentle bred woman wanting the security of marriage and family, answered an ad in the “Matrimonial News,” where men were advertising for wives. Along with five other women, Calico set out on the Santa Fe Trail hoping to find love at the end of the trip. What they all found was nothing short of a hellish nightmare journey. Follow Calico and the others while they seek safe haven at the end of the Santa Fe Trail. Join them as they meet the savage and the civil on their passage. Will their dreams be fulfilled or lost along the way?


Comment: It has been years since I got interested in this book and how appealing the blurb seemed. I imagined a story like those old western ones but where the Indian protagonist would not be the villain. I was really hoping this would be a romantic story.

The heroine is Calico Benson, a young woman whose position at a rich woman's house is precarious since the woman's nephew can't seem to let the servant girls alone, always causing them to be dismissed. Calico can't let that go so when she receives a reply from the man whose advertisement for a mail order bride she had inquired, she believes her fate will finally turn positively.
Joining another group of ladies who are traveling with the same purpose, Calico isn't surprised to know part of the journey might be rougher and dangerous but the guides have a good reputation and there is an Indian man helping the group go in safety.
However, something weird seems to be in the air but none of the girls would imagine what is about to happen to them...

Often readers comment on how authors let their imagination go free, how they (or their editors) don't really measure how the story will be seen by so many different people. I think the issue with this book is the opposite: the author had a story to tell, she put it on the page and voilá. The story is here.
However, despite its amazing potential in several little things, the complete text is severely lean and direct, there isn't a lot to muse about, to connect with. I think the story wasn't developed properly.

Basically, this tells us the story of a group of women who travel along guides and goods to the West as mail order brides. The journey is difficult, especially from a certain point on, and it's pretty obvious something weird is going on but for most of the story nothing too obvious happens, except the very small smirks here and there, or the looks some characters seem to exchange. I only understood what was going to happen at a certain point but the drama and emotional impact was heartfelt when the twist does happen.

Where I think the story failed was, precisely, in how lacking the emotion and plot are. Things are told and showed to us but there's a severe lack of inner turmoil and thoughts to follow those actions, which means they can seem very superficial. The characters do think about certain things, they have some doubts about what is in their way but the story is so simple in how the development goes that everything feels a little too simplistic when, if one thinks about the little things, should not.

Calico is the main character only because we do have her thoughts more times but the POV changes a lot and that can be distracting. It also makes the story feel even tighter and along the fact it's only around 95 pages, it means things develop very quickly.
The romance isn't one. We can extrapolate that the clues are here and there and the love can be a higher feeling than what a few words could mean but in the end, even though I was glad they ended up together the way they did, it felt a little weak.

The plot ends in a positive note despite the difficult events right before. I'd say the end was a bit too fluffy, a bit too unlikely but it was an entertaining, hopeful end.
I suppose I could summarize the things that could be better developed but let's just say that the story has all the elements to be great but didn't quite get there.

Writing and character development were quite lacking but, in general, the positive elements still made me appreciate what happened and entertained me. It's really a pity this couldn't have been better developed because it could be spectacular.
Grade: 7/10
Publicada por S. em Thursday, June 04, 2020
Email ThisBlogThis!Share to TwitterShare to FacebookShare to Pinterest
Etiquetas: Grade 7/10, Lisa Day