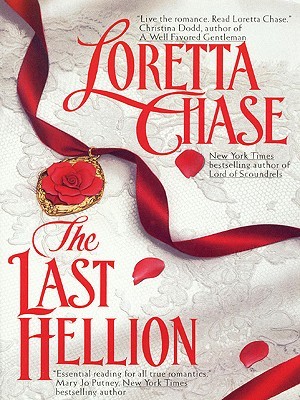 Vere Mallory, the Duke of Ainswood, has everything--he's titled, he's rich, he's devastatingly good looking--and he seems determined to throw it all away. Disreputable, reckless, and wild, the last of the Mallory hellions is racing headlong to self-destruction...until a mind numbingly beautiful blonde Amazon knocks him off his feet--literally.
Lydia Grenville is dedicated to protecting London's downtrodden. Dissolute noblemen like Ainswood are part of the problem, not the solution. She would like him to get his big, gorgeous carcass out of her way so that she can carry on with her work. The problem is, Ainswood can no more resist a challenge, especially in female form, than he can resist the trouble she seems to attract.
If they can only weather their personal firestorm...
they might survive the real danger that threatens all they hold dear.

Comment: This is the 4th and last installment in the connected Scoundrels series by Lorraine Heath. Having really liked the previous story, as so many other readers had, I was hopeful this was also very enjoyable but I was ready to not be as dazzled. I’m very glad I was positively surprised by how much I actually liked this one too!

In this story we meet Lydia Granville, a very rebel but determined woman whose mission in life is to write about the misfortunate and the poor and especially the struggles and the harm done to women. Her work for a newspaper makes her lack of personal life something she doesn’t even think about, but that changes when she clashes against Vere Mallory, the duke of Ainswood, a man known for his libertine ways but who – obviously- hides fears and pain under the facade of cynicism and boredom.
As the two meet again and again, their attraction is only matched by their inner desire to help those who need and the duke is a surprising help for Lydia. But when those close to them are affected, can they truly join forces to stop something nefarious from happening?

I was more than happy with how amazing this story ended up being. I admit I was a little influenced by how much I liked the previous book and how much more accolades it had in relation to the other three books of the Scoundrels set, but I must say this 4th one was a precious gem and I had a great time reading it too.

The story is filled with adventures and larger than life characters and situations that reminded me of those romantic movies where the main couple is both clashing and embracing after countless scenes where they reveal their love declarations through amazing little things such as battling someone who wanted to hit a child or defending a person who can’t fight the battle properly.
Vere and Lydia felt like this to me, they kept showing their huge hearts and emotions defending someone, by helping someone or by unmasking the ones who prey on innocents. They did suit as a good match, as a couple they worked very well for me. I was happy to see them interact and trust one another a little more as each chapter went by and they had tor ely on each other for some sort of clue or action.

Vere is a fascinating hero because he is one of those people hiding his emotions and softer feelings under a disguise of carelessness, of cynicism, of leisure without concerns. He is in pain; he doesn’t want to suffer so he plays the part of a libertine without really being malicious about it. I wanted him to be happy and although his actions towards winning Lydia over started with simple curiosity, I felt very happy indeed with the way they ended up together.

Lydia is a little more layered, I think. She went through a terrible childhood; she faced very difficult situations and a lot of heartbreak too. She could have turned into someone cold and strict or resigned but she is strong and a fighter for those who don’t have a voice. I’m very glad her relationship with Vere felt balanced and solid because they always saw one another as equals despite their backgrounds. There was something that compelled them to one another and I was very happy in how they progressed and became an established couple by the end of the book.

The plot hides some little surprised but to be honest, I was so enamored by how the romance developed, by how every scene with them was adorable and fun to read that the plot seemed rather secondary. There are things that could have been done better for certain. There are many characters too, some with their own POVs, and some plot holes were fixed a bit too conveniently but in the bigger scheme of things, this didn’t bother me at all.

I was having fun reading this book, I was able to sigh and think aww and hum at the right moments so any negative aspects passed me by without much concern.
Of course not everyone would have the same opinion but for me, this worked very well and I’m satisfied this ended up being a great read and a great end for the series.
Grade: 9/10
Publicada por S. em Saturday, June 13, 2020
Email ThisBlogThis!Share to TwitterShare to FacebookShare to Pinterest
Etiquetas: Grade 9/10, Loretta Chase