Emilie Richards - One Mountain Away 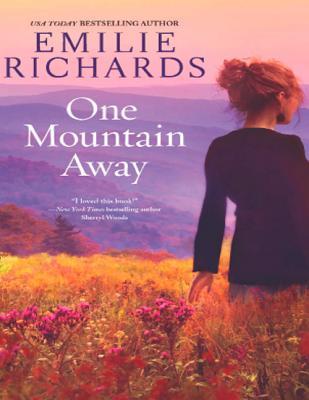 With nothing but brains, ambition and sheer nerve, Charlotte Hale built a career as a tough, do-anything-to-succeed real-estate developer. She’s at the top of that mountain…but her life is empty. Her friends are as grasping and insincere as she has become. Far worse, she's alienated her family so completely that she's never held or spoken to her only granddaughter. One terrifying day, facing her own mortality, she realizes that her ambition has almost destroyed her chance at happiness. So Charlotte vows to make amends, not simply with her considerable wealth, but by offering a hand instead of a handout. Putting in hours and energy instead of putting in an appearance. Opening her home and heart instead of her wallet. With each wrenching, exhilarating decision, Charlotte finds that climbing a new mountain—one built on friendship, love and forgiveness—will teach her what it truly means to build a legacy.

Comment: I don't remember why I added this book to my TBR but it was probably because I read something positive about it somewhere. It was finally its time to be read and although there were good elements, it wasn't as special as I imagined.

In this novel we meet Charlotte Hale, a women in her fifties who has had a life aimed for success, especially since her childhood wasn't great. However, Charlotte discovered she is ill and did some thinking and realized she doesn't have a loving family nor do her business accomplishments mean that much now. She decides to give back something, as a way to redeem herself from the things she didn't give when she could, namely to her ex and their daughter or those who might have needed help and Charlotte thought it wasn't a good investment. She starts by helping a woman who she sees sleeping in her car but she decides she will be a better listener to those who might need it and she will give a hand if possible. Can Charlotte make amends before it's too late?

I knew this would be a story that would focus more on the emotions and attitudes of the characters than in a real solid plot but I was still surprised to see how detailed the author was in giving Charlotte (and other characters, since there are plenty of POVs) time to go from one situation to another while mostly processing things internally. This means sometimes it felt things were a bit too slow.

I wouldn't say the goal here was to give a portrayal of how spirituality or thinking about dying could influence someone to live differently, I'd say this was more a story about someone who knows time is running out and wanted to do something to not feel as guilty about life choices. Still, I can understand the perspective of those who saw Charlotte's path into it and talking to her pastor and thinking about the need to change things would look like a way into accepting God or religion...but for me, this was not the case. I think the religious side was just another aspect of how someone goes into do something they feel is right when death is predictable.

I liked the story, I liked there were several characters, somehow connected and I see some will have bigger roles in upcoming books. I even liked Charlotte and I can't see how her choices in life were that bad...was there a lack of communication? Yes, but in real life things aren't perfect either so I can accept her distance from others, but of course, we could say anyone, like Charlotte and the other characters, could do things differently. I was still interested in seeing how she would go in trying to make amends.

What I thought would be heavier here was the romance. In fact, there's no romance at all. I might have read something wrong or maybe I got a wrong impression by some word, some comment I've seen but I hoped there would be some romance developing and what happened wasn't that. Not that the story really needs romantic couples falling in love but it was something I expected. By the blurb of the following books and the fact they are focused on other characters, I assume we will have more romance content in those books.

For such an emotionally driven story, I have to say I wasn't as touched by it as I imagined. I mean, I could see where the emotional aspects were heavier, but this wasn't heartbreaking...I can only say that some parts were a little boring, so I started to feel a little numb towards the whole thing. The end was predictable sadder but it wasn't as profound as I thought it would be, considering the overall feel of the story.

Thinking about this, I liked the story, yes, but it wasn't as wonderful as I thought it would be. Nevertheless, I'm curious about the subsequent path of some of the secondary characters so I'll read, at least, the next book. One day.
Grade: 6/10
Publicada por S. em Wednesday, July 14, 2021
Email ThisBlogThis!Share to TwitterShare to FacebookShare to Pinterest
Etiquetas: Emilie Richards, Grade 6/10