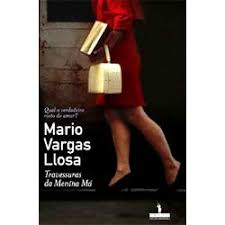 At first I wasn't very thrilled to be reading it, I confess I'm not very used to south american authors's way of writing. It sounded too "spaced out" if you know what I mean. But the fact the main character - 1st person narrator - was a translator (my aim in life...) I was very curious to follow his life, his job, his travels...not so much his devotion to the bad girl.
The book follows the life of Ricardo, since he is a young man until he's more than 50 years old. We see his feelings, his life, his love. We see his relationship with the "bad girl" from the title and what she does to him, both mentally and physically.
She used him in every way, she appeared there when it was convenient, she left him 3 times too, also when she wanted and I felt for him, I don't think devotion should be met with such games. I'm not saying she should love him back, but respect? Yes, that he deserved. He took care of her when needed, he gave her money - which she stole, in several different ways - but worse, she used him their whole life and still, in the end, she came back and sais yes.
Is this love? This almost blind devotion to someone even when it's bad for you?

I actually enjoyed the book, even when I was sad about it. Much better than what I anticipated.