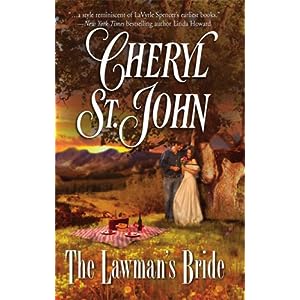 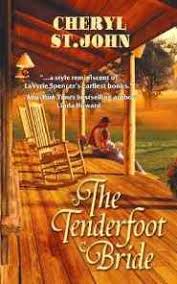 Both are sweet stories, where love and trust conquer all, although I must say the second one is better.
In The Tenderfoot Bride, Linnea has to find a job before her baby is born but she doesn't tell her new employer that. When he finds out she thinks that's it, but considering the new feelings between them, she stays and he even helps delivering her baby girl. She still thinks she's unworthy of him, of course, but in the end she understands she's got the right to be happy.
I just melted, I really like it when things seem to be doomed but then hope and love make it all better and perfect in the end. Real Life isn't like that, so I love it in books.

In The Lawman's Bride, the same formula but I didn't like it as much as the previous one.
Sophie Hollis is a Harvey Girl (she works for the Arcade Hotel - as did Ellie from The Doctor's Wife) and she finally has an honest living after years with a con-man who forced her to do things because he had bought her from the Indians. Now she's free and working like any other girl...except she's lying about who she is. When the marshal Clay Connor threats her now peaceful existence with the talk of new Wanted posters in the jailhouse she goes there one night to steal them and avoid recognition. However a fire has started and she ends up saving the marhal's dog. After this, she simply can't avoid the marshal...or falling for him.
It was a cute, sweet story too although I din't like Sophie as much as the heroines from the previous novels.

All in all it's a nice trilogy and I'm quite happy to have read it.