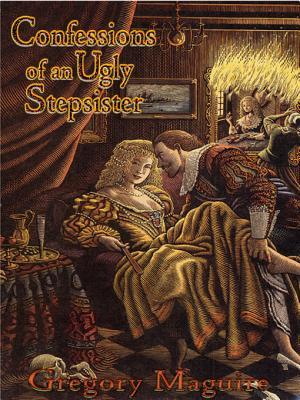 We all have heard the story of Cinderella, the beautiful child cast out to slave among the ashes. But what of her stepsisters, the homely pair exiled into ignominy by the fame of their lovely sibling? What fate befell those untouched by beauty . . . and what curses accompanied Cinderella's exquisite looks?
Set against the rich backdrop of seventeenth-century Holland, "Confessions of an Ugly Stepsister" tells the story of Iris, an unlikely heroine who finds herself swept from the lowly streets of Haarlem to a strange world of wealth, artifice, and ambition. Iris's path quickly becomes intertwined with that of Clara, the mysterious and unnaturally beautiful girl destined to become her sister.
Far more than a mere fairy-tale, "Confessions of an Ugly Stepsister" is a novel of beauty and betrayal, illusion and understanding, reminding us that deception can be unearthed--and love unveiled--in the most unexpected of places.


Comment: To be honest, I don't remember when I got this book. I know it's been in the TBR fr a long time, probably more than 2 years. Some poor books have a hard path here...
Anyway, I do know I got it because it would be a re telling of Cinderella and I thought I would get a witty, fresh take on a beloved story (not my favorite fairytale but close), especially after hearing a word here and there about the author's work with other known stories into his own POV. Of course, I should have paid more attention but sometimes the need to start a book without any influence can be tricky in the end.

Like I said, this story is a new take on the Cinderella tale, but the narrator is someone else and the main POV is Iris's, one of the stepsisters. The setting is Netherlands, in the 17th century, an era when flowers started to be important for the country's economy and when the plague was haunting Europe.
Iris is a smart, lively young lady but she knows she's not the beautiful, not like Clara, the girl she first meets through neighbors and later becomes her stepsister. Iris is also kind and her weird take on things around her give the reader an unique vision of the happenings, except the prologue and epilogue which are related by someone else.

I had some expectations when I started this book. I thought the book would tell the same story, with a more contemporary setting and perhaps with a more modern writing. I admit I didn't read even the blurb before starting so it took me by surprise when things were closer to original in terms of action setting.
The book is a re telling based on the original but decidedly with the author's own vision. He uses Iris, one of the stepsister's, to be the main character and from whom we get all development. Iris is an intriguing character and has many qualities even some she doesn't believe herself to possess, like something special because beauty isn't her best asset. As we see things from her POV and not Cinderella's, we get a very different version of things. All characters we've known from the original who are here have a completely different personality, let's say so even when going through the motions of the original tale.

I won't go much into the details about the action and the setting, which I admit can be seen as historically interesting and intriguing. The setting is rich in details, new things and it can be seen as positive.
With some historical influences, the plot is close to what we would expect but always with the author's personal take.

My issues are with the type of story.
The author is surely talented and it shows on his care with the details, the precise facts and even historical clues all over the place.
It is also obvious the author picked Cinderella, someone perfect and beautiful in the fairy tale we all know and turned her into someone with flaws and personality. He uses the fact she's relying on her beauty for most her life and how the fact we see beauty in certain things will change how we think of them or about what they must mean. It's an interesting subject.

But this isn't what I thought I'd get. All settings and subjects apart, I didn't enjoy the story. The story seemed over thought, like the author really wanted things to be said a certain way, shown a certain way and that was it. The main characters, no matter how well created weren't easy to sympathize with, honestly I didn't care for them much except Casper and Iris. I think this shouldn't be labeled as a re telling, this is an independent story based on Cinderella, that is it.
I got the feeling the author also wanted to make this more serious and academically oriented than what I would expect. But the execution just wasn't for me and I struggled to find eagerness to read. I confess I skipped pages here and there just to move along.

The epilogue and prologue are told from a different character. It's supposed to be a surprise so I won't spoiler it, but the end is really unfinished in my opinion. We only get glimpses of what happened to everyone and I don't think there's enough closure or the exact trick to make it sophisticated or erudite.
Sadly, for me, despite the little things which could be done more successfully, this book was both a disappointment and a loser after all things considered. The writing was boring and the execution just not good for what I imagined.
Grade: 3/10
Publicada por S. em Tuesday, October 07, 2014
Email ThisBlogThis!Share to TwitterShare to FacebookShare to Pinterest
Etiquetas: Grade 3/10, Gregory Maguire