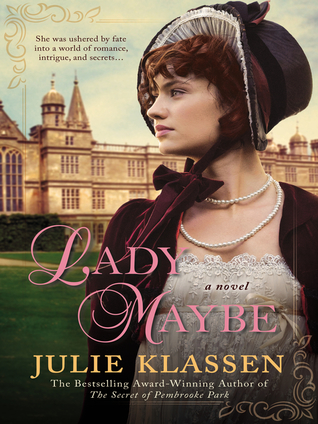 One final cry…“God almighty, help us!” and suddenly her world shifted violently, until a blinding collision scattered her mind and shook her bones. Then, the pain. The freezing water. And as all sensation drifted away, a hand reached for hers, before all faded into darkness…
Now she has awakened as though from some strange, suffocating dream in a warm and welcoming room she has never seen before, and tended to by kind, unfamiliar faces. But not all has been swept away. She recalls fragments of the accident. She remembers a baby. And a ring on her finger reminds her of a lie.
But most of all, there is a secret. And in this house of strangers she can trust no one but herself to keep it.


Comment: This is yet another title by author Julie Klassen, an author of inspirational historical romance I've come to appreciate, even if not all the stories I have read so far by her have been totally amazing. Nevertheless, in general, her stories are engaging and the plots she comes up with tend to be captivating, although the ends not always my preferred choice. I mean, not that they don't end well but not usually the way I'd prefer.

In this story we have the trope of the mistaken identity. Companion Hannah Rodgers had left the employ of lady Mayfield after a situation she could not avoid anymore but circumstances force her to return for the last wages she was owed and she finds lady and lord Mayfield about to travel. She decides to accept lady Mayfield's offer of employment again but during the journey they have an accident and lady Mayfield is seen to disappear underwater.
However, somehow Hannah is rescued along lord Mayfield and she has the ring of lady Mayfield in her hand, perhaps when she tried to hold her hand before water dragged her down. After some recovery time filled with confusion and disorientation, Hannah realizes the kind people who rescued them near the Mayfields' estate think she is lady Mayfield.
How can Hannah continue deceiving them, though? Are her secrets that necessary to be kept?

I liked this story, it was really enjoyable and even more so because I think the end worked out pretty well for me.
This is labeled inspirational or christian fiction but usually those terms have a slight pejorative tone in the sense they could look as being preachy but this book, as others by the author, don't always have that feel to me. Often the religious content is more moderate and I, for one, prefer that.
Still, for those who also link inspirational to christian fiction with "clean", then perhaps some of this author's stories might not be what those people should look for.

As I've said, I liked this story. The heroine Hannah was someone I could very easily sympathize with because she was a woman with difficulties at a time women didn't have many options if they wanted to survive in life. She is estranged from her father and I suppose that was a path she could have taken at the limit of her ability but her attitudes and choices despite that possibility made perfect sense to me.

The story is quite simple in how it is developed, basically Hannah has to think and worry about her actions, about whether she is being unfair and opportunist after the accident that put her in an impossible situation, but while still thinking about her struggles and someone she needs to protect.
I liked how she slowly got to become more and more concerned about the fact her secret might be discovered because this proved she was aware she made a bad choice by not revealing her identity. However, she couldn't just leave, she had responsibilities to other people and in a way, to the husband of her employer, who got more hurt than she did. I was eager to keep reading and to see if things could turn out happy at the end.

There is, of course, a romance although I think the fact we have a love triangle sort of diminished the fun for me. I'm not usually a fan of love triangles and in this case both men who showed interest in Hannah were good guys (even considering their faults) and it always turns up as being unfair to one of them how things happen.
I liked Hannah's choice, though, because of three or four reasons - some spoilerish - but mostly because I think they both deserved happiness more than were Hannah to end with the other man. I mean, he was a nice man too but I could see he would not be as deserving as Hannah's choice. The last scene was romantic, in my point of view.

The resolution of the novel isn't without its drama and there are two things in the end that surprised me, one more than the other. The big one might feel as an easy way out of a complicated problem but this is fiction and I think things worked well enough.
The complexity of this novel is at the personality of the characters and their motivations. Some characters are easy to like, others to dislike immensely but the main ones have many layers and that is key to make this a compelling read.

All in all, I liked this book, it's currently up to the other one by her I liked the most and after six books read, despite the more negative aspects, I still find curiosity and eagerness to read another so that has to count for something.
I'm very glad this was a good one, for me.
Grade: 8/10
Publicada por S. em Wednesday, February 26, 2020
Email ThisBlogThis!Share to TwitterShare to FacebookShare to Pinterest
Etiquetas: Grade 8/10, Julie Klassen